Bees Not Disappearing After All

THERE IS NO BEE APOCALYPSE

You’ll be relieved to know that the bees are not, in fact, on the verge of extinction.  I know I am, and so are the bees.  They’ve had some challenges, but ultimately they have emerged from the media storm stronger than ever.

In 2005 people began to say the bees are disappearing.  According to the USDA, beekeepers had 2,410,000 hives[1] in the United States at that time. After nine years, several major documentaries, and countless stories of coming “beemageddon,” US beekeepers now have 2,640,000 hives in the US.[2]  That’s a 9% increase, so you might ask how can the bees be “disappearing” for nine years and be up by almost ten percent at the end?

You’ve probably seen this chart showing the disappearance of the bees since 1947: 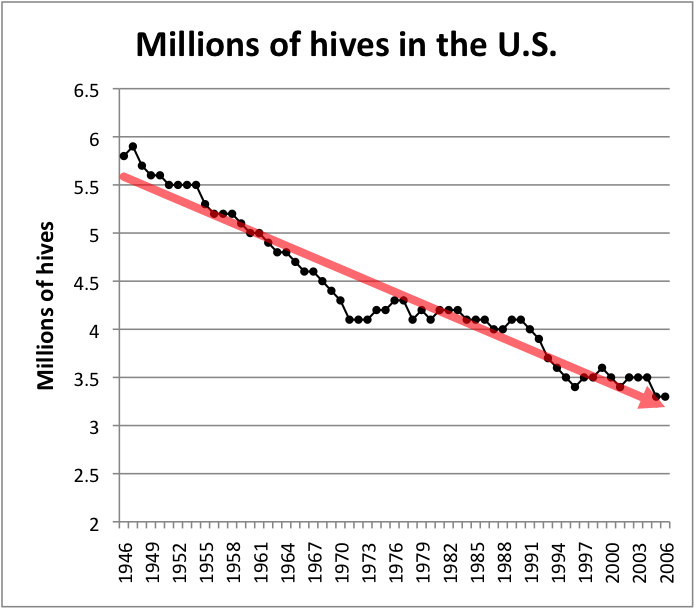 That looks pretty grim right.  But those are cherry-picked statistics from people who want to mislead you.  Let’s look at the bigger picture: 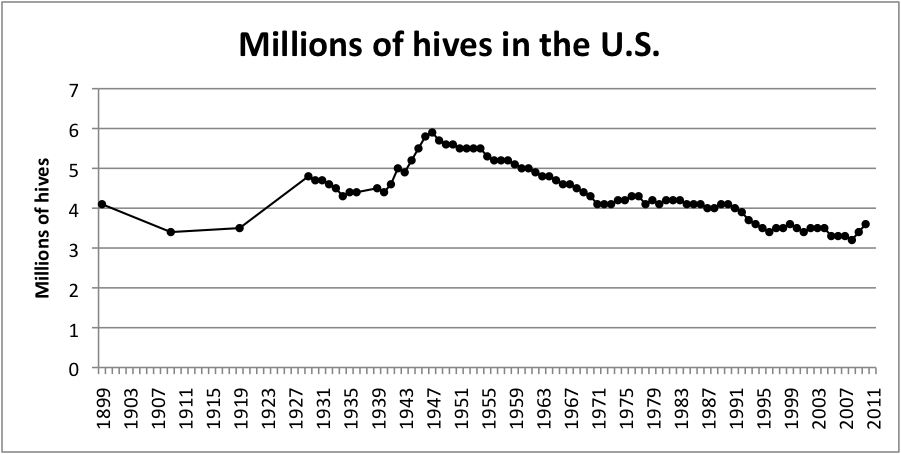 1947 clearly isn’t the representative number of hives we “should” have, it’s an outlying peak explained by other factors – namely that beekeeping had been heavily encouraged by economics during WWII because there was a sugar shortage and beeswax was being used to hold together the precursor to plastic explosives.[3]  Any time you see the much-bandied-about bee population chart that only goes back to 1947, know that the source is being intentionally obtuse and misleading.

As the saying goes, “statistics don’t lie, but liars use statistics.”  Another true fact you’ll see mentioned often is that beekeepers have lost an average of 32% of their bees every winter.[4]  In nature beehives have a 60% winter mortality though, and the population still survives, because this is a natural part of their ecology and a surviving colony sends out an average of six swarms a year to start new colonies. Beekeepers not only significantly reduce the natural losses, even now, but they can split all their hives in early spring to simulate the natural urge to “swarm.”      Obviously the number doesn’t hextuple every year, rather, beekeepers make up their loses to keep the number of hives they have the time and equipment to support. The number of hives therefore stays at a level determined entirely by economic factors.  “Winter losses” are a real thing but it is a bald-faced misrepresentation to equate that as the same as “annual loses,” as if the winter losses aren’t more than made up for every spring.

Let’s look at the bee population over a much much longer period of time (source):

Nope, not disappearing.  Let’s look at the comparatively recent world bee population, using figures the UN has been collecting since 1961:

In the 90s a mite called “Varroa” spread from a species of Asian bee to the common honeybee and caused that dent you see in the 90s.  Let’s look at one more graph.  The one above cuts out around 2008, so let’s scrutinize the most recent ten years, since that is, after all, the time period during which we are told the bees have been disappearing: 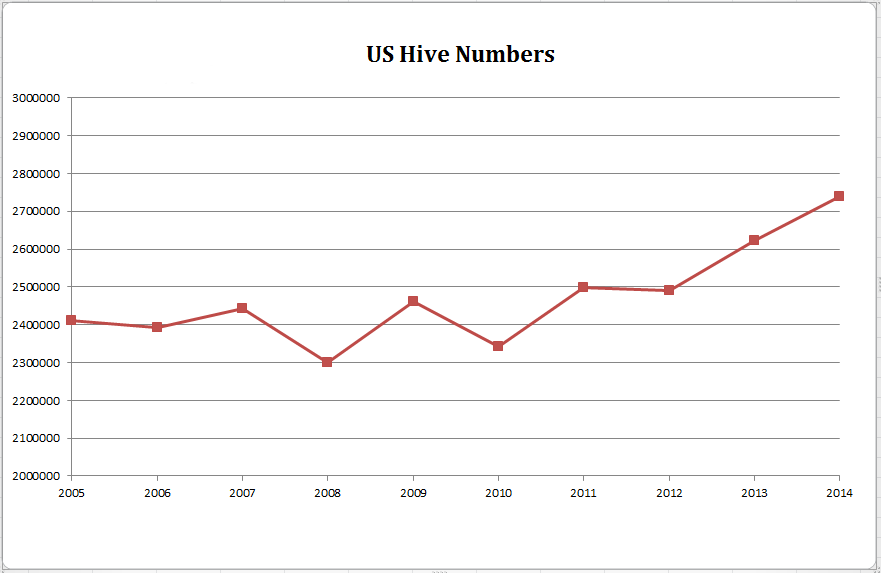 Hmm, looks like the population has gone up in all but two years.  Even the USDA department of statistics couldn’t resist pointing out (source) the incredible contrast between the actuality and what documentaries have portrayed the situation to be.

Returning to the subject of misleading statistics, another “fact” which often peppers articles about the allegedly disappearing honeybees is that “some beekeepers have lost 80% of their bees” due to Colony Collapse Disorder. I have no doubt this is true.  With the thousands of beekeepers in the United States it would be equally true to say “some beekeepers have lost 80% of their bees” to bears, vandals, fires, or even auto accidents.  At any given time “some beekeepers” have experienced any loss you can imagine, it doesn’t make that specific type of loss an epidemic.

And finally, the king of non-facts that are often quoted, a sure sign that whatever you’re reading doesn’t care one pollen-grain about the truth: “Einstein once said ‘if the bee disappeared off the surface of the globe then man would only have four years of life left.’”  All you have to do is google that quote with Einstein’s name to come to an article on Snopes,[5] –-the very reputable source on the real deal for all urban legends great and small– about how Einstein didn’t say that.  Or at least, there’s no record until suddenly in 1994 some beekeepers in Brussels put it on a pamphlet to support their demands for more government support.  Did this interesting quote somehow go entirely unrecorded in the preceding 39 years since his death or did they make it up to support their claims?

So why are people saying the bees are disappearing if they’re not? There’s two groups that are saying this, for different reasons.  The first is the news media and documentary film makers who both want to sell you a sensationalist story.  Sadly, people have come to expect that from the news, but documentary filmmakers seem to often be even worse – there’s been a series of “documentaries” about bees lately[6] by aspiring director/producers hoping to make a name for themselves with a documentary that seems to be about a big problem.  The bee “disappearance” is a perfect recipe for them: lots of cool high definition shots of bees, the potential to blame man for messing up mother nature, the potential to imply we’re all going to be doomed if it’s not fixed (note how many of them work the Einstein quote in somewhere despite presumably having done at least enough research to have performed a google search …presumably). 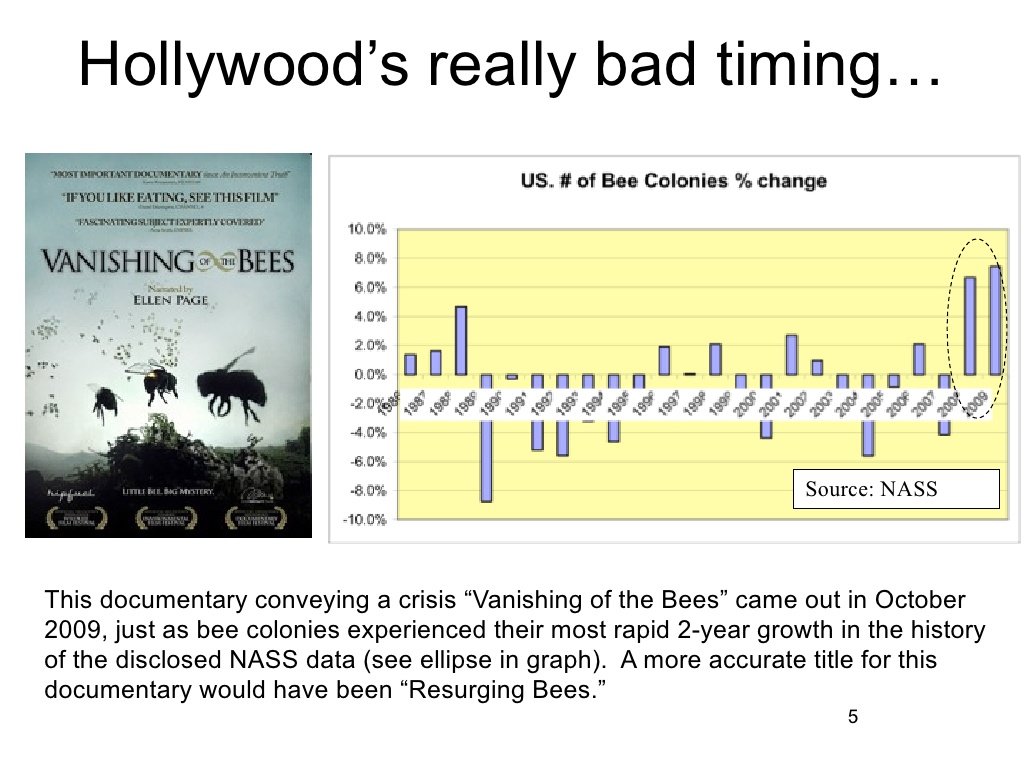 (this is an actual slide from a presentation by the USDA Dept of Statistics!)

The second group that’s interested in giving you a false belief in the coming bee-pocalypse is opportunistic “bee rescuers.”  It is very common for homeowners and business owners in urban & suburban areas such as Orange County to find themselves with unwanted bees living in their property.  A licensed pest control technician specializing in bee control can very easily and cost-effectively eliminate these bees for you, but lately a cadre of unlicensed “bee rescuers” have sprung up in Orange County insisting that people should “save all the bees” and charging upwards of $700 to do so, and it’s not unheard-of to hear of quotes upwards of $2400 (licensed professionals typically charge around $150 to take care of bees).  There is also evidence that in at least some cases they are “rescuing” bees and then driving around the corner and gassing them.[7] These persons performing this unlicensed pest control are benefiting from several factors: pest control regulations aren’t enforced upon them, people have no idea how much it ought to cost, and they have had tremendous success portraying themselves as champions of the environment and the heroes of the moment.  All this is, really, though, is opportunistic unlicensed pest control based on misrepresentations.

So what’s the bottom line? What do we want you to get out of this?  Our goal is merely to educate the public on this issue.  Bees are fascinating creatures but you shouldn’t need a completely false story to make a documentary about them, and you shouldn’t feel guilt-tripped into paying $700 to have a self proclaimed “bee expert” lie to you about how he’s going to save the planet by “rescuing” the bees in your tree.