Are they really “Killer Bees”? 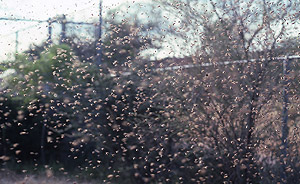 An established colony of Africanized honeybees (AHB’s) can be unpredictable. They will be defensive because their home is nearby. The reason they have been called “Killer Bees” is because many unfortunate incidents happened since they first entered the country. This is because they are much more defensive than their European relatives. They are more easily agitated; more of them will join the fight to defend their nest, and they will also pursue a predator longer and farther. They are simply more temperamental, but are not outwardly aggressive without provocation. These traits are genetically inherited and as such AHB’s are not good for beekeeping in urban areas. Remember, these traits have been developed and passed down over thousands of years from their ancestors that had to survive other predators and environmental factors in Africa.

How did AHB’s get here? 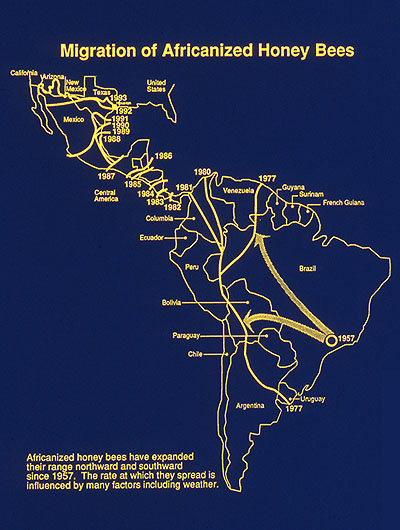 Africanized honeybees were brought to Brazil by a scientist in 1956 in attempt to breed a hardier bee that would thrive in the rainforests. When these bees and queens were released they reproduced at a very rapid rate creating the hybrid Africanized honeybee. Their unforeseen migration was estimated at a rate of 100 to 300 miles per year. They were found in Venezuela in 1973 and in Mexico in 1986. They arrived in the Southwestern United States in the 1990’s. Currently, Florida and the Southeastern states are adjusting to their arrival as well. They are not expected to travel much further North however, as they do not survive as well in the colder climates.

Originally, honeybees of European lineage made up the wild bee population in the US, but AHB’s have been able to overtake their relatives for several reasons. The brood incubation period is a few days shorter (they hatch sooner) for AHB’s and their swarming behaviors also give them an edge. Genetically the Africanized genes are not so easily ‘bred out.’ Much research was done and is still being done on this hybrid, but at present the only way to keep them ‘out’ of a domestic hive in areas populated with AHB is good management and the use of a technique called ‘re-queening.’ In this process queens that have already been mated are introduced into colonies to insure no Africanized DNA is present. See Beekeeping.

How do I tell if they are Africanized?

You Can’t. Unfortunately, you cannot tell the difference between the European and Africanized honeybees just by looking at them or observing their behavior. An estimated 95% of the honey bees in Orange County (not kept by beekeepers) are hybrids of the two subspecies. To truly determine if bees are Orange County Africanized bees, DNA testing must be performed.

A queen born in the wild will mate with 10-15 drones (male bees) at the beginning of her life. This provides enough semen to fertilize her eggs for her lifetime. This means she has DNA from many unknown genetic lines that will swirl and different eggs can be laid at different times. The colony may seem fairly friendly this week and very nasty next month.

Reproductive migratory swarms of AHB’s are typically very docile. However, absconding swarms of AHB’s can be very defensive. The safest course of action whenever you see a swarm or colony of honeybees is to give them the same respect you would give any feral creature. Give them their space and do not attempt to deal with the problem on your own. Call a professional.

What about the scary stories?

Unfortunately there have been stinging incidents involving Orange County Africanized bees. Check out Bee Busters In the News for some of our media coverage. The truth is that Bee Busters responds to stinging incident calls several times a year (Absconding swarms are leaving a nest entirely due to various undesirable conditions). Although rare, Orange County Africanized bees have been responsible for seriously injuring people and animals in the past. Small animals are the most susceptible to bee attacks. Due to their small body weight the venom affects them more drastically. Small animals do not know to run and seek shelter in the event of such an attack. The elderly and small children are also at a higher risk. In general it takes 10 bee stings per pound to actually be fatal to a human being if no other allergies are present. Always go for shelter in the event of a bee attack and do not provoke a swarm or colony of bees. If you believe you may be in danger of medical complications from bee stings seek medical treatment immediately.

Click here for more information on Stinging Do’s and Dont’s and Honeybees.