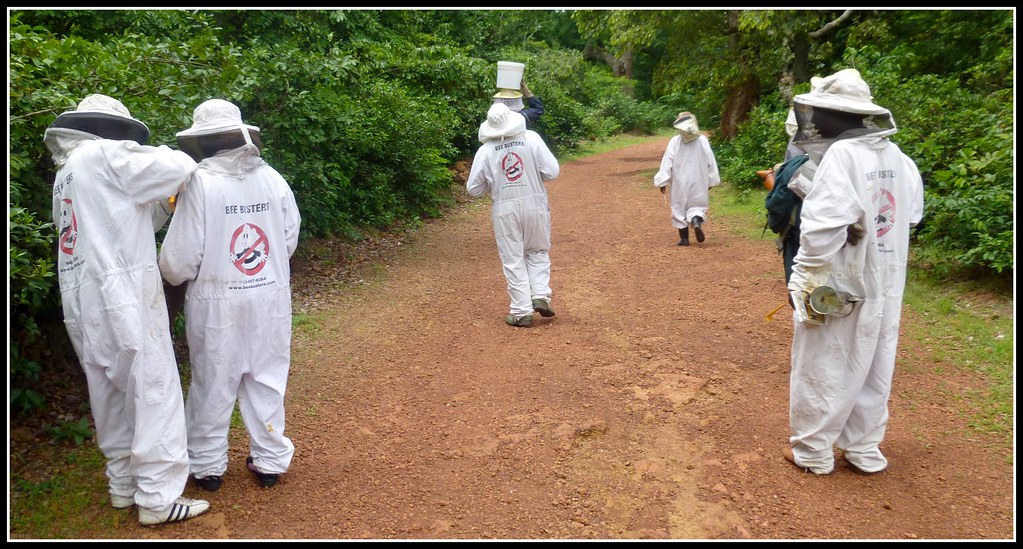 Bee Busters is now represented by ten uniformed beekeepers in the country of Guinea, in West Africa! No we won’t be offering bee removal service in Conakry or neighboring Timbuktu, but Bee Busters beekeeper Kris Fricke was recently in Guinea sharing his beekeeping experience with beekeepers there.

Kris also took ten old Bee Busters suits and donated them to local beekeepers in Guinea. This allowed everyone who attended the training sessions to suit up and participate, and local garment makers can use our thoroughly-tested suits as a guide for their own. 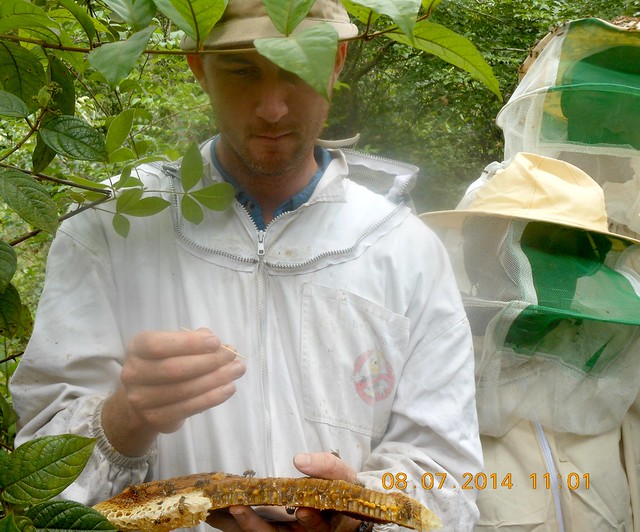 The project was part of the United States Agency for International Development (USAID) Farmer-to-farmer (F2F) program, administered by Winrock International. Kris spent 21 in days working with the Federation of Guinean Beekeepers (FAPI) to train beekeepers and train FAPI trainers who will, in turn, train beekeepers on more modern sustainable methods of beekeeping in developing countries.

While Guinea’s lush landscape has a tremendous potential for beekeeping, and there are over 165,000 traditional beehives in use, the number of more advanced Kenyan Topbar Hives is estimated to be only around 3,000 throughout the country, and many of the beekeepers that own them still treat them much the same way as traditional hives, doing little “beekeeping” other than harvesting once a year. 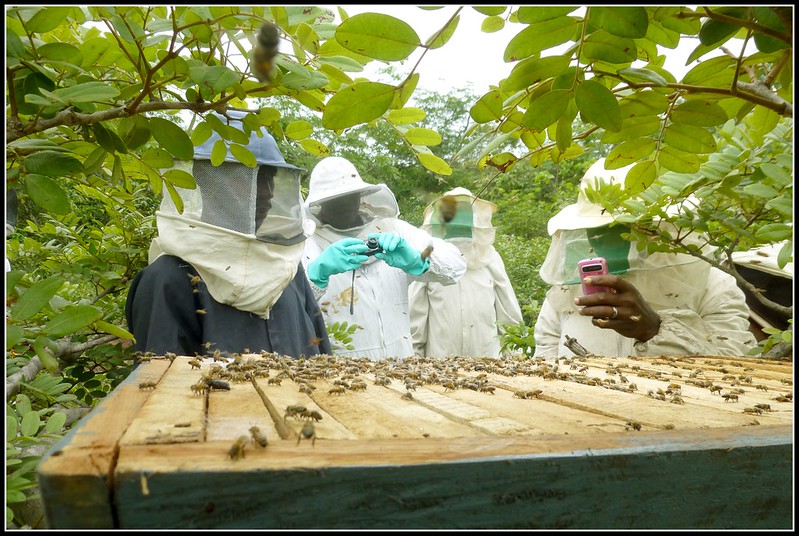 When people hear “Guinea” the first place they think of is often the polynesian island of “Papua New Guinea,” but the nation just called “Guinea” is actually right beside “Guinea-Bissau” on the western bulge of Africa:

This project was based in a village near the town of Labe, which you can see just to the left of the G in Guinea in the below map. It took about eight hours to drive there from Conakry, the capitol.

The training covered both proper management and hive construction. Certain distances within a hive are critically important, if the proper “bee space” isn’t given, bees will build combs the wrong direction in a hive, making them impossible to remove, or refuse to occupy the hive box at all. Kris showed them easy ways they can make sure the distances are correct. Proper hive construction should have a significant impact on increasing production. 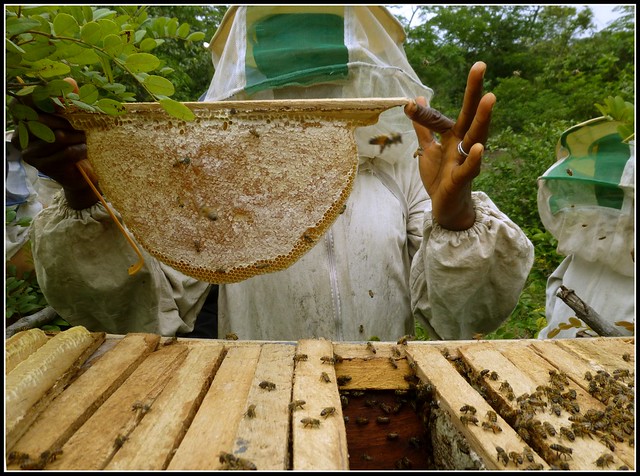 The training also involved both lots of hands-on field work and presentations with a projector to show them diagrams and images of things in a more well organized manner than one can hope to encounter things in the field. French is a national language of Guinea, but many of the beekeepers didn’t speak French either, so Kris had to speak through an interpreter who translated to French, and then a second interpreter translated to the local language. Despite this, Kris was able to answer many, many, questions and build a great rapport with the gathered beekeepers. He intends to continue to keep in touch with them and help the beekeepers federation itself build its capacity to assist the Guinean beekeepers.

While in the field Kris was housed in a village without running water or electricty. Even after charging his laptop with a portable generator and using a mobile usb modem he was unable to reach the internet, so for the entire time he was in the field he was cut off from the outside world and any modern conveniences! He enjoyed the experience, particularly living directly with the local villagers. When he wasn’t training beekeepers he could often be found kicking a ball around with the local children, there’s some things you don’t need to share a language to do! 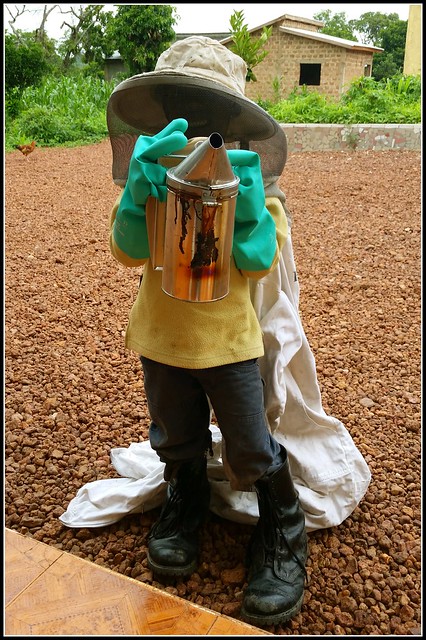 An interesting sidenote to this project is that the “biggest ebola outbreak in history” was occurring in Guinea at this very same time (July, 2014). Kris was undeterred and believed his project was worth the risk, but it was still a concern that could never be completely put out of mind. Kris was confident he hadn’t been exposed to it, but was still very relieved when he saw a doctor on his return and was certified ebola free! 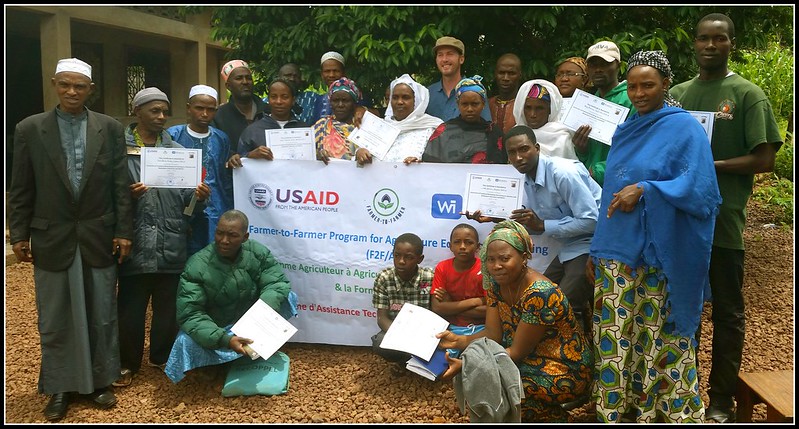 View the rest of Kris’ photos from the project here