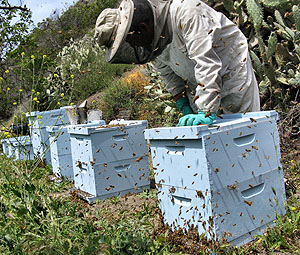 Beekeeping can be a wonderfully rewarding hobby for people of all ages. It can also be a profitable agricultural business for others. Bee Busters keeps several hundred hives in the Southern California area.

Our bees participate in pollination as well as honey production. We encourage Orange County beekeeping as a hobby and are always glad to help someone get started.

We advocate having a good Orange County beekeeping experience, and we are proud members of the Orange County Beekeepers Association, so feel free to contact us! 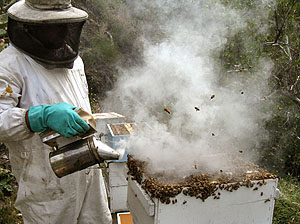 First you will need some equipment. The modern hive known as the ‘Langstroth Hive,’ after its designer, is one of the most effective for harvesting honey. It was developed in the late 1800’s. It is an almost square box (called a hive body) usually with 10 frames inside. These frames serve to hold the combs in a uniform fashion so that the bees are easily managed. The frames are fitted with ‘foundation’ which is beeswax pressed into a thin sheet with a honeycomb pattern. The bees will use this to start building their combs. Bees are capable of making combs from scratch completely on their own, but this also saves them some work.

These boxes come in two sizes. The deep supers (boxes) typically contain combs that store brood (eggs and larvae) and the shallow boxes are used to store combs with honey, called honey supers. A good size hive can have several deep supers on the bottom and several honey supers on top. Honey supers are only added at times of the year when there is a honey flow because surplus nectar is available. To keep the queens from laying eggs in the honey supers a metal grate, called a queen excluder, can be added above the brood chambers. This metal grate allows the workers through to the honey storage, but the queen is too big to fit through the holes.

One thing everyone seems to know for sure is that beekeepers smoke bees. This is true; one of the most important tools is the smoker. The reason for smoking is commonly misunderstood. Smoking does not make the bees leave any particular location. Smoke aids a beekeeper for 2 reasons. Bees that feel threatened produce alarm pheromones calling the defense squad to duty. The smoke helps mask this pheromone so fewer bees will be called to defend the hive. Second, the smoke causes the bees to sense that fire is imminent and as such they will gorge themselves on honey. Once full of honey they are unable to maneuver as well. In general smoking the bees reduces the likelihood of stinging and pushes them further into the hive.

The most obvious use of honeybees is of course the production of honey. Thousands of years ago people would rob wild hives for the sweet substance. Over time, ancient peoples developed different styles of hives and semi-domesticated the bees. Today, honey production has grown into a massive commercial industry. In 2007 the average yield per commercial hive was 60.8 pounds.When the bees process the honey it takes several steps. First, the foragers bring back nectar from the flowers. It is mixed with enzymes from the bees’ glands. It is then given to the house bees in charge of storing honey. These bees continue the process of adding enzymes and depositing it into the honeycomb cells. The bees will work as a group to move air through the hive by beating their wings. This process helps evaporate almost all of the water from the nectar. When a satisfactory amount of evaporation has occurred the bees will seal combs. This is called capping. Honey that is stored properly can last almost indefinitely. 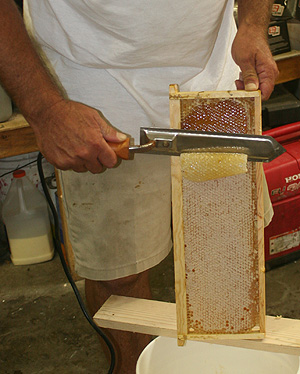 A hot uncapping knife will cut the wax caps off the honey before extraction.

With an effective hive box, the frames can be easily removed for harvesting. The honey supers are removed, and the frames are taken out. Because the bees have capped the honey with wax for preservation, a hot uncapping knife must be used before extraction. The frames are then placed in an extractor, which is a centrifuge. The machine spins the frames around and the centrifugal force draws the honey out of the combs. The honey will collect at the bottom of the extractor and flow out through a spigot or ‘honey gate’. The honey is then strained and ready to go. A large commercial operation will utilize much larger machinery. After uncapping, the frames can be returned to their supers and large numbers (of supers can be spun in the giant extractor at a time.One of the major benefits to this method is that when done properly the honeycombs stay almost completely intact, maintaining their shape and stability. This means the beekeeper can return the frames to the beehive for them to fill again. This saves the bees loads of time and the beekeeper a lot of money. 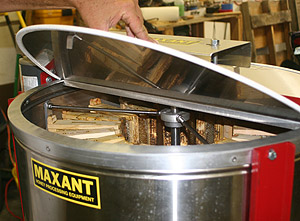 The most important function that bees perform is pollination. Bees were domesticated several thousand years ago for honey production, but today farmers keep them for the even more necessary function of pollinating the world’s food sources. Bees are the only insects that can be so effectively raised, kept and moved for this purpose.Bees pollinate 1 out of every 3 bites that you put in your mouth. This includes much more than the obvious citrus fruits. Bees are required to pollinate the alfalfa that cows eat as well as fruits and vegetables. Some of the common crops produced in California and pollinated by bees are almonds, apples, cherries, plums, melons, legumes, vine crops, alfalfa seed and other seed crops.

California produces a majority of the world’s almonds. Thousands of hives are trucked to the almond orchards every February. The bees will be left to their work there for about a month and a half. The average price paid per hive in 2008 was $125 each. This cost varies each year based on demand, rainfall and other market value factors. This can be quite lucrative for large-scale commercial beekeepers, but the work is no picnic. Caring for and moving hives is hard work.

Some beekeepers are referred to as ‘migratory beekeepers’ because they travel around the country for most of the year. After almonds the bees can be moved to melons, and then on to the next crop. Often, the beekeepers will also have holding yards to keep their bees in between pollination contracts.

The media has helped bring much attention to bee health in the last few years. This is wonderful for the bee world and a lot of new research is now being funded. However, bee health is not a new concern. Orange County Beekeepers have always had issues to worry about. The most common worry is food and water. Bees need a constant source of water just like any other creature. They also need a food source. Naturally, honeybees build up a food storage for the winter. This consists of honey and pollen. During the winter when flowers are scarce many beekeepers feed their bees. This can be done with sugar syrup and sometimes needs to be done on a very regular basis. 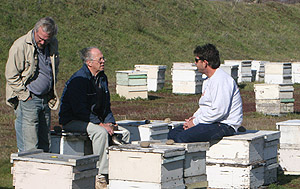 Bees are susceptible to many diseases, parasites, and other infections. Many beekeepers medicate their bees to remedy or prevent known problems. Most recently, Colony Collapse Disorder(disappearing bees) has stumped beekeepers. The research is ongoing, but presently Nosema ceranae and Israeli Acute Paralysis Virus have been linked to the situation.

A few decades ago the new problem on the books was the Varroa mite. Many problems have been known for an extended period of time, and treatments have been developed. When new problems arise beekeepers must learn to adapt and keep their bees healthy. A lot of beekeepers and scientists are working on these ongoing topics. See our Links page for some scientific links.

How long do you think these guys have been doing this?

In the wild, colonies split by sending off new swarms when a new queen is hatched. In beekeeping this is not very desirable, because of the loss of bees or a valuable queen. When a hive is identified as healthy enough, the beekeeper can decide to spit it manually. In this case about half the brood and half the honey will be given to each new hive. A new queen can be introduced to the second hive, or left alone the bees will turn an existing egg into a queen. This should not be done in areas with Africanized bees as the newly hatched queen will need to go on a mating flight and bring home the undesirable genes. Queens can be ordered from queen breeders to ensure a healthy queen with good genetics. See queen breeding below.

Bee Brokers: To coordinate between farmers who want pollinators, and beekeepers that want pollination contracts there are professional Bee Brokers. Just like in other industries it can pay off to have an experienced professional organize all the details.

Queen Breeders: Having good queen bees is essential. Since the queen lays all the eggs in the hive, the temperament and productivity of the entire hive is a direct result of her quality. A good queen will lay about 1,500 eggs a day. A weak queen that lays significantly less can be very detrimental to the hive and should be replaced.

To ensure that a beekeeper has the best queens they often purchase them from Queen Breeders. This is actually another business altogether when it comes to beekeeping. Some farms specialize in only breeding queens. For commercial purposes queens are usually only kept for 2-3 years for the best productivity. Queens are often marked with a dot of paint on their back. This helps the beekeeper keep track of her, her health, and what year she was hatched.

Bees can hatch their own queens in queen cells (See Bee Biology), but this is not always desirable. In the southern United States most areas have a problem with Africanized honeybees. If newly hatched queens are left to go on wild mating flights the wrong DNA could come back with her and the once good hive could change its attitude. See Africanized Bees

Beeswax is a remarkable substance. It can be used for a number of things, the most obvious of which being candles. It is also used in cosmetics, visual arts, horticultural grafting, and even surfboard wax. Beeswax candles burn very bright, and are drip and smoke-free.

They have been used for thousands of years, and are still much desired today for their high quality.

This is the practice of using bee products for medicinal or therapeutic reasons. Although these practices have not been proven effective by today’s scientific standards, their use dates back thousands of years to Egypt, Greece and China. The products used include honey, pollen, royal jelly, propolis and bee venom. Bee Venom apitherapy is believed to help with arthritis, multiple sclerosis, and autoimmue diseases. Honey is a healthy sugar believed to aid in weight-loss, sleep quality, neurological function, act as a topical antibiotic and antimicrobial agent, and of course sooth the common sore throat. Many of these claims are currently undergoing scientific testing and the results are already quite promising. (Note: Children under 1 year of age should not consume honey.)