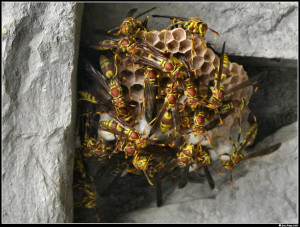 While this one is on the decorative stones on the side of a wall, these paper-mache nests are mostly found hanging on the underside of a surface.

There are several types of wasps here in the Orange County area. Wasps include Paper Wasps, Mud Daubers, and Yellowjackets. Hornets are a type of wasp, but there are no hornets on the West Coast. Unlike the other types of wasp we have around here, yellowjackets live in large colonies like honeybees do. Please click here to visit our page about Yellowjackets in Orange County.

All paper wasps belong to the genus Polistes. Common species in Orange County include Polistes dominulus, Polistes aurifer, and Polistes exclamans. For practical purposes they all behave more or less the same. Paper wasps like to build their nests in generally open areas on the underside of things – roof eaves, for example, are ideal and they are frequently found there. Their paper nests will range in size from a pebble to a fist, and host one to a few dozen wasps.

Behavior: Paper Wasps are very unlikely to sting. Stings usually occur when someone accidentally bumps into one, or if someone is throwing things at an occupied nest. Paper wasps eat smaller insects, such as aphids and spiders. Wasps are actually beneficial in that many of the critters they eat are pests. 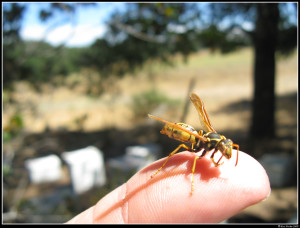 Our staff are thoroughly comfortable with all forms of bee or wasp!

Treatment: If you are uncomfortable dealing with your wasp nests, we would be more than happy to help you. Many times nests are vacant and do not pose a threat. However, attempting to knock an occupied nest down could cause you some problems. While they are unlikely to sting unprovoked, a wasp sting can be very painful.

Tip: Paper wasps are often found next to extremely lush over-watered lawns (probably due to the consequent abundance of insect life to prey upon). We’ve found that these homeowners have been able to lessen the amount they water their lawn and still have a healthy lawn, while greatly reducing or eliminating the wasp population.

(Sceliphron caementarium) Mud daubers build nests on the sides of buildings, frequently in areas that are somewhat sheltered from direct sunlight. Their nests often look like nothing more than a splotch of mud on a wall from a casual glance, but closer inspection will reveal it is structured roughly into a series of cylindrical chambers with holes at the ends. Unlike paper wasps, mud daubers are only rarely found hanging around their nest. A female mud dauber will build her nest; lay eggs inside with food for her young (such as anesthetized spiders) and then seal it up. At this point her job is finished and she will move on. 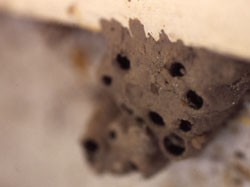 A mud dauber nest looks quite different from the paper wasps’ nest. From a distance it might look merely like a splotch of mud on the wall.

Mud daubers are also often found inside AC ducts and other ventilation equipment, in which case they can get lost and end up scaring people inside office buildings.

Treatment: Mud daubers are capable of stinging, but it is exceedingly rare. Like paper wasps, they feed mainly on small pest insects. Although they may look scary with a long abdomen and stinger, they will usually pay you no attention unless you provoke them, but accidents can happen. Whether you have one nest or a collection of them, we can take care of your Orange County wasp removal.  Call us today at 949-497-6264.