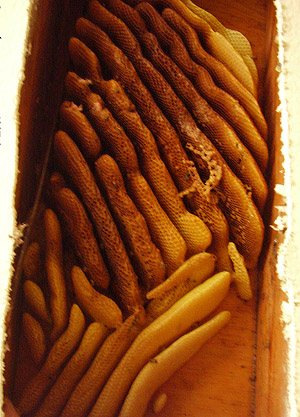 A community of honeybees is referred to as a colony. Colonies that are domestically kept in a beekeeper’s box are called hives. Honeybees prefer to live in hollow cavity spaces where they can be protected from the elements. They also tend to use a space where they will be able maintain temperature, humidity and proper ventilation. Before urbanization, bees would utilize cavity spaces in hollow trees and rock formations. Today, humans have provided the bees with even better options for nesting sites. Some common sites include the following: 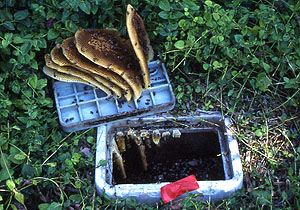 Since the introduction of Africanized Honeybees in the 1990’s, colonies in valve and meter boxes have become extremely common.

Bees will also sometimes choose to live in more exposed areas. This is usually because the space is protected enough. These ‘exposed colonies’ are usually found in trees with dense foliage or sometimes at the eaves of a home. It should also be noted that Africanized honeybees are less picky about their nesting locations. Before they arrived in California it was practically unheard of to find a colony in a small meter box or birdhouse. European honeybees tend to choose larger spaces.

A colony begins as a swarm. The swarm that has split from another colony will send out scouts looking for a suitable nesting location. When they decide to move in the swarm will appear very quickly (within about an hour) and cluster onto their new location. They will begin to disappear into a small opening or crevice leading to a void space. Once inside they will get to work quickly building honeycombs and the queen will begin laying eggs. All the while this is going on under the surface, only a few bees may be seen at a time at their entrance. There are usually a couple of guard bees at the entrance, and the foragers will come and go bringing nectar and pollen to the nest. 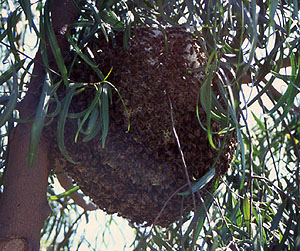 Bees always aim to establish their colony in a sheltered space if possible. Sometimes, however, they will settle for a less protected location and build an ‘exposed colony’ hanging from a branch like in cartoons. These differ from swarms in that they are permanently established, with combs. They are usually extremely defensive and should be treated with maximum caution!

A colony is a highly complex society. A colony of honeybees will consist of 1 queen bee, anywhere from 10,000-60,000 female workers, and sometimes a few dozen drones (male bees.) The bees utilize pheromones and complex dances to communicate with each other. They are incredibly clean creatures and will even remove deceased bees from their colony with great efficiency. This can cause a collection of dead bees on the ground near their nesting location. Click here for more information on Bee Biology.