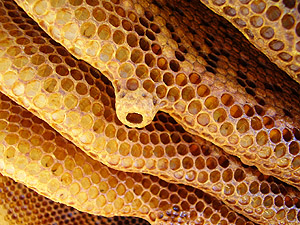 A typical honeybee colony consists of about 10,000 to 60,000 bees. There is one queen; sometimes a few dozen male drones (at some times of the year there will be none); and the rest are all female workers.

Workers and queens start out as the same kind of egg. How the egg is fed will determine what type of bee the larvae will grow up to be. If the larvae is fed normal amounts of honey and royal jelly, it develops into a worker. However, if it is fed only large amounts of royal jelly, the larvae will grow up to be a queen. Queens can also purposefully lay unfertilized eggs, which they lay into special drone cells, and these develop into drones. 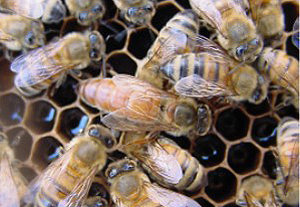 The queen is about 1/3 longer than a worker bee. Her abdomen is larger for reproductive purposes. She will almost always have a ‘queen’s court’ of attendants around her. She inserts her abdomen into a cell to lay an egg.

Queen Bee – Every colony will have one queen bee. The queen bee is about 50% longer than worker bees.  She is the only one that lays eggs, but she can lay 1500 to 2500 eggs a day! Queens also release pheromones that control hive behavior. Pheromones are essentially smells, or nature’s perfume. These pheromones control things such as how much of the work force is allotted to various tasks, when it is time to allocate more comb area to brood (eggs), and when its time to swarm.

Queens go on one mating flight at the beginning of their life, during which they mate with 10 to 20 drones. They store all the sperm from this adventure and use it to fertilize eggs for the rest of their life (which can be three years, or even up to eight in really extreme cases!).

If a queen dies or the colony is overpopulated the colony will prepare to send off swarms. Workers begin feeding several larvae royal jelly and rearing them to become queens. This process is most common in spring and fall here in California. When a larvae hatches as an adult queen, it hunts down the other queen larvae and kills them.  If there is no queen in the colony it goes on a mating flight and assumes queen duties immediately. Typically the old queen will leave with the swarm, but in some cases it can be the new one. During good weather, and especially with Africanized bees, a colony can issue off several new swarms in one day. 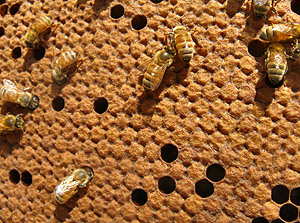 Capped brood cells where worker bees will hatch. Nurse bees care for and feed the brood.

Drones – Drones are the largest bees in the colony. Yes, they are actually bigger than the queen, but there are only a few dozen present in a colony at a time. They are the only males, and their only purpose in life is to mate with queens on mating flights. The vast majority of them don’t even get to do this, as many more drones are produced than queens. Mating is fatal for drones. Drones present in the colony at the onset of winter are killed to conserve food supplies. In short, the life of a drone is an extremely limited and expendable one. They play no role in the day-to-day upkeep of the hive. 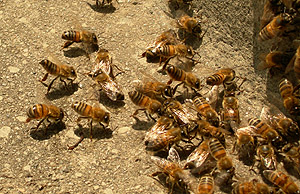 These bees are ‘fanning.’ This spreads the pheromones to direct the swarm traffic to their exact landing location.

Workers – The overwhelming majority of bees in a hive are workers. Workers are all female, and do most of the tasks required to run a hive. Worker bees perform different tasks at different stages in their life. All worker bees begin their lives as nurse bees, taking care of the brood cells and larvae. They then progress in turn to building more combs, receiving nectar and pollen from foragers, and guarding the hive. At the final stages of their life the bees are foragers. Workers only live between 14 and 38 days (24.7 on average, or 500 flying hours). The health and lifespan of a colony’s foragers has been directly related to the survival of the hive. A bee’s wings can only beat a finite number of times before they are worn out and beyond repair.

We specialize in Orange County Bee Control, Rescue, and Removal.  Call us today at 949-497-6264 with your bee problems!